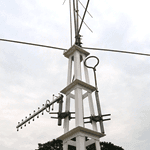 Before Babe's Chicken, a popular dining establishment in Historic Downtown moved in, the building at 200 Main Street was the site of Old City Hall. Residing in the shade of the towers, it housed government offices, the library, and a modern, three-bay fire station. Perched atop the building sat a gangly, slightly contrived, not quite state-of-the-art communication device.

Likened to a miniature version of the towers, this central structure initially supported the fire department warning sirens, but as the sirens only brought volunteer firefighters as far as the station, the task of communicating the location of the emergency to them fell to then City Secretary Marie Vincent, who would hang out the window and yell the address of the fire as they sprang into action. Originally twice as tall, a gust of wind blew the antenna over in 1992, and only half made it back atop the building.

As technology advanced, the tower began sprouting peculiar-shaped paraphernalia, each with a different form and function, however obscure and mysterious. But down in City Hall, it was business as usual.

Then on Sunday evening in August 2000, Dr. Jannay Valdez of Desoto sited an Unidentified Flying Object (UFO) near the towers, speeding through the sky towards them. Although Police Chief Steve Rhodes reported no other UFO sightings that night, Dr. Valdez was undeterred, reporting the incident to the International UFO Museum and Research Center in Roswell, New Mexico.

The contraption is on exhibit and visible from the Texas Street side of the building. Babe's founder, Paul Vinyard, has generously and quite meticulously preserved the contraption to ward off marauding chicken hawks.